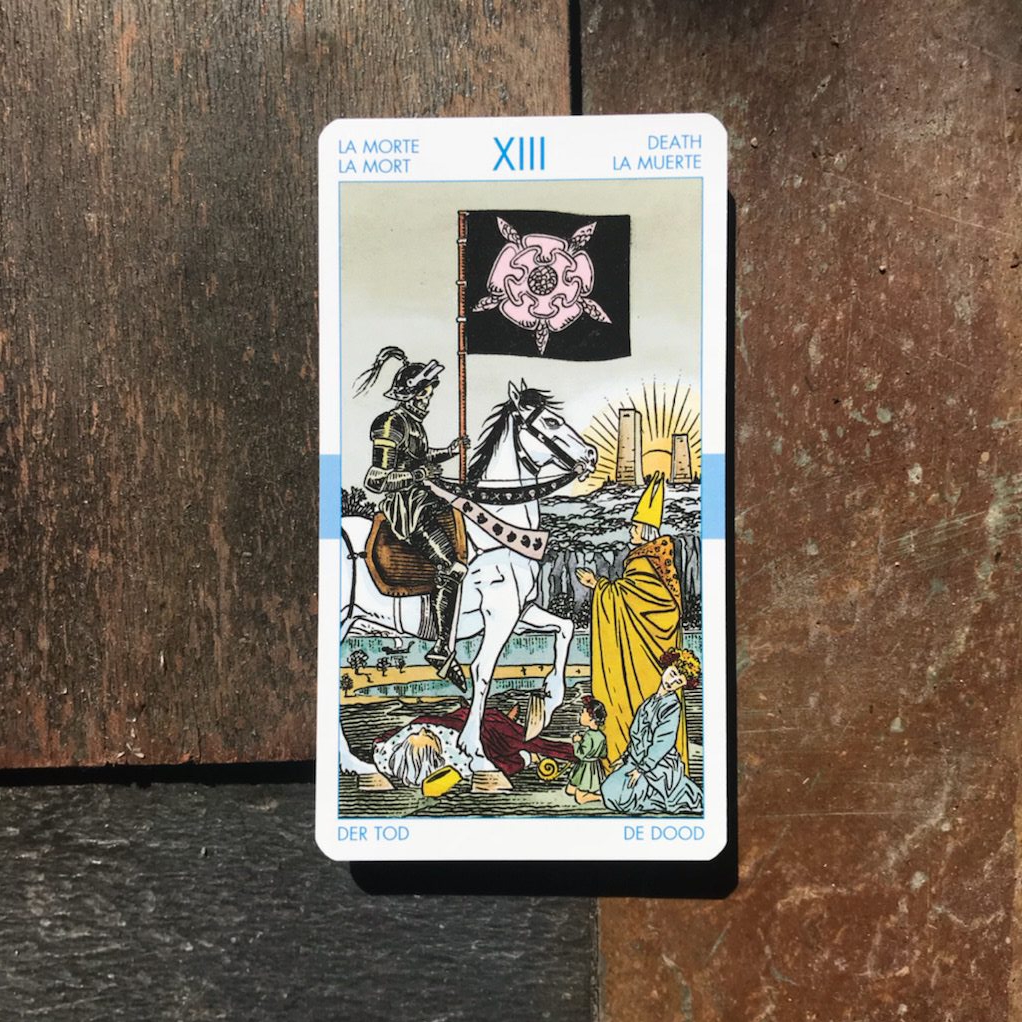 “Death smiles at us all, all a man can do is smile back.” – Marcus Aurelius

As the end of this year approaches, we bid farewell to a decade.

Goodbye to accomplishments, failures, trials, and people we knew and loved.

However, as this year ends, another new decade begins.

We shed a layer of physical and emotional skin, only to be born again.

Imagining oneself as a traveler on a long journey, preparing to cross a narrow bridge with a heavy pack, we must release and let go of items or emotions that are weighing us down and sucking the energy out of us.

We must say goodbye to the things we no longer need.

The (Unnamed) Death Tarot card is the 13th card of the Major Arcana.

It teaches us that the end of one phase is merely the beginning of another.

Many people shudder at the thought of death and fear such a card appearing in one of their spreads. The armored skeleton sitting atop a pale horse, sweeping through the land and ending reigns once thought to be everlasting.

Nothing material lasts forever and life is a constant cycle of chaotic events.

It is here within this state of metamorphosis that we must find solace and learn to embrace change.

Upon the banner that Death holds appears the mystical five-petaled rose, symbolic of Mars and the eternal Life-Force.

In the background of this card, we see the rising Sun between two towers and a river flowing to and fro from the Sea. The waters represent the constant circulation of life, being drawn up from the Sun into the clouds, and then falling back to the ground to become one with the Sea once again.

The patterns of life change from the old to the new, and are reborn again.

The 13th Rune of the Elder Futhark “EIHWAZ” also represents regeneration and transformation and is connected to Yggdrasil, the Tree Of Life.

It marks the middle of the Runic Alphabet and is considered a turning point in the Runic Journey. Liberation from the fear of death.

In Norse Mythology, Odin hangs himself from a branch of the Yggdrasil to be granted the power of the Runes. He makes a sacrifice for something greater.

Within this idea of transition, Death symbolizes the idea that one’s former ‘self’ has died and given birth to a brand new persona.

“By embracing change, you will make quick progress on your path.”

Many other cultures believe the number 13 to be a powerful and sacred number, which leaves us to wonder why it’s been ‘hidden’ or misconstrued to appear unlucky in Western society.

Highrises and elevators are constructed to exclude any reference to the number, and slasher flicks embrace the idea of Friday the 13th being the day of death.

Graveyards are some of the loneliest of places, even though the remembrance of our loved ones and their remains are often laid to rest here.

We have isolated death from our culture out of a fear of the unknown.

In the Bible, the story of the Last Supper tells of thirteen people seated around the table; Jesus, and his twelve disciples.

Following this, Judas Iscariot gave Jesus up to the Romans for thirty silver coins, allowing his so-called savior to be judged and subsequently crucified. After witnessing what his actions caused, he returned the silver and hung himself.

As the story goes, he was replaced by Matthias as the 12th living Disciple, meaning Judas became the 13th Disciple and this sacred number was banished forever into an evil abyss by association.

However, even in his death, Jesus rose once again to transcend into the Heavens.

In his ultimate sacrifice, it is believed that our mortal sins would be forgiven and we too would one day again be united with Source.

When the leaves fall from trees, they break down into the ground and provide sustenance for the following year.

When we slaughter plants and animals for food, they provide us with a necessary nutrient profile for our life-force to continue.

Throughout our own lives, the cells within our bodies will die and regenerate.

Apoptosis, or programmed cell death, is a completely normal and necessary part of everyday life. Ridding the body of zombie-like cancerous cells, or those that have acted out their roles and are no longer needed.

Just as you would weed a garden, your body filters out that which it does not need.

The seeds you choose to sow (EFFORT/ENERGY) will be the harvest that you reap.

As the end of this decade comes to a close, you must remain strong and vigilant.

During this time of transformation, I wish you all the best in your journey.