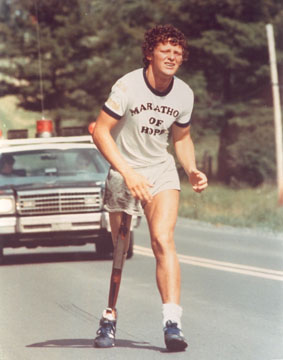 Ever since I was a little kid, I’d always been in awe of what Terry Fox accomplished.

Terry Fox is a Canadian legend.

This weekend marks the anniversary of the Terry Fox Marathon of Hope. An initiative and campaign to support the memory of a man who physically ran across Canada to raise money and awareness for cancer research.

He made it all the way from Newfoundland to Thunder Bay, Ontario.

Terry did this all with one leg while battling cancer.

Within our current culture, some mainstream celebrities (and their teams of producers), would have us believe they are new-age superhero’s because they started their own ‘not-for-profit’ or retweeted some hip idea to the masses.

Or better yet, coming out of the closet on social media, in a time and place where being Gay is received as the coolest thing ever.

Almost instantly, their perceived podium of power and influence is projected to a whole new level. Fans and well-wishers come out of the wood-work, hungry to please a celebrity influence that could seemingly care less about anything substantial in return.

This platform of prestige that seems so easily granted to someone because they’re on a television show, they sang a song, or danced the ‘Dougie’, is questionable at best.

Fame nowadays appears to be more of an appointed title, rigged through corporate backing and social media algorithms.

Almost everyone can rhyme off some Drake lyrics, or has heard about Justin Bieber’s’ escapades, but what are these superstars actually bringing to the table?

What have they offered to the world other than a song and dance routine?

Where is all the energy, that you as the consumer give up without question, going towards?

Let’s begin holding these folks more accountable for their actions.

If any of them end up reading this blog, then guess what?

I fully believe in the fact that you could do more for the world.

Give away your bling-bling, volunteer some time with the elderly or at a local soup-kitchen perhaps. Invest in local education. Uphold your beliefs. Help transform your community and instill an environment or culture that you truly believe in for society!

Terry Fox will always be my hero because of what he accomplished.

He was a short kid from Winnipeg, who just wanted to play basketball.

Due to his small stature, his coaches suggested he start cross-country as well.

Terry was diagnosed with osteogenic-sarcoma, cancer that affects the bones around the knee joint, in March of 1977.

When he was 18 years old, his right leg was amputated 15 cm above the knee.

Never giving up hope, Terry continued forwards with rehabilitation and a prosthetic leg, determined to still achieve the very best he could, for himself and others.

It should be noted that the night before surgery, Terry had read a story about a man named Dick Traum; an amputee who had recently accomplished the New York City Marathon. Inspired by these what he had done, Terry Fox went on to accomplish his own version of that dream.

Everyone is inspired by Someone…

He never wanted to be famous.

He didn’t rock Gucci shoes for his run.

He wasn’t given keys to the city, or a guest spot on Jersey Shore.

He humbly asked that all of the attention and money being donated go to the Canadian Cancer Society because Terry believed miracles were possible.

In September of 1980, Terry was forced to stop his Marathon of Hope, with the cancer invading his lungs. He died shortly before his 23rd birthday the following year.

Terry Fox was the youngest person to ever be made a Companion of the Order of Canada, and his determination through life has inspired millions of people around the world.

For you as a reader, and a consumer, my attempt here is to raise the bar for you.

Hold your heroes to a higher standard.

Hold yourself to a higher standard.

What would the celebrities that you worship do, if suddenly put in Terry Fox’s position?

Would they commit to being a real superhero and making a difference?

In today’s world, celebrities have an incredible amount of reach to massive audiences, and the ability to create change.

This is the rest of us calling you out on that.